Out of the blue, I set up a survey on my sidebar about the best cabin crew employer in a few well-known Airlines in the Middle East and a couple in the rest of Southeast Asia. I didn’t expect that there’s a favorable response from my readers who are also active enough to share their thoughts on the matter with a simple click. Below is the survey that I asked you guys.

WHICH IS THE BEST AIRLINE CABIN CREW EMPLOYER?

Check out the results below on the best airline cabin crew employer based on 33 correspondents: 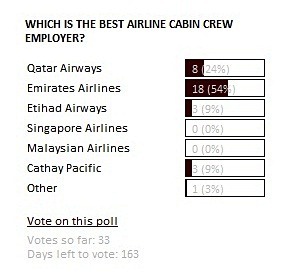 So far, leading is Emirates Airlines which has 54 percent, next is Qatar Airways with 24 percent. Etihad Airways has only 9 percent while Cathay Pacific has 3 percent share. There’s a one percent vote on ‘Other’ air cabin crew employers while Singapore Airlines and Malaysian Airlines did NOT warrant any vote at all.

I may have missed out on a couple of airline flight attendant employers but it just goes to show the satisfaction rate of Emirates vs Qatar as an employer. We don’t know how many Qatar cabin crew rumors in PPRuNe forums are going on with Qatar flight cabin crew transferring to Emirates Airlines.

Still, it’s still too early to decide on airline company is the best employer in the industry. We still have a number of days left to vote so pick your choice on this Best Cabin Crew Employer Survey.