Most of the time, they post Open Days in countries and usually just include Male cabin crew aspirants in some countries. Usually they would just provide a posting for women in most cases and just post an Open Day for both male and female in few other destinations.

Do you see any male cabin crew in Qatar?

However, upon checking one of the recruitment hiring for Qatar Cabin Crew in Asia, there is an exclusive opening for male cabin crew in Manila, Philippines on June 4. Yes, this site was proven wrong when Qatar Airlines is showing that they are hiring male flight steward positions. Based on the Qatar website, here is a screenshot of an Open Day for recruitment for men flight attendants only. 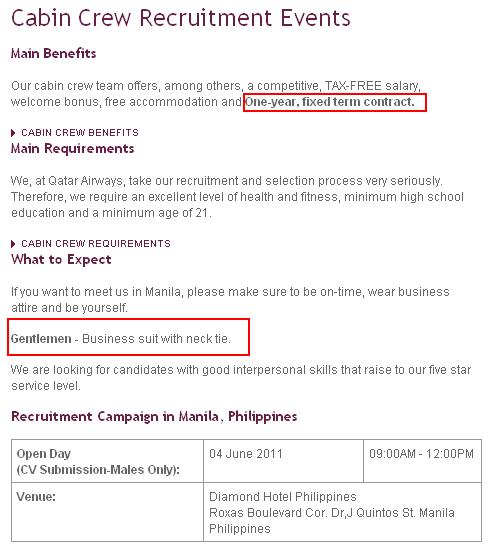 Somehow, the male cabin crew seemed to good to be true. Indeed it is! Upon further checking, they are only opening the job position for a one-year fixed-term contract. This means that any male cabin crew who will be hired on this open day says that the contract will expire in one year. There is no guarantee that it will be renewed after the time frame.

Oh well, I guess this is better news than no news for male hires for flight attendants at all, right? So long as the aspirant will get the opportunity to show his worth, this is already good enough. Knowing that there is an opening is already a happy sight to behold. Hopefully, this contract will only be temporary once a flight steward is able to prove his worth. At least we were able to prove that the airline company Qatar Airways Hire Male Cabin Crew after all.